Most of the silent movies that will ever be made have already been made. But most of the people who will use git aren't using it yet. So rather than focus on the people who already use git, we have made some departures from "vanilla" git usage in order to make adoption easier for people who haven't used git or version control before.

Here are some of the ways we've departed:

In vanilla git, the working copy consists of three trees of files:

Here are just a few of the commands needed to manage this "index" mechanism:

In DiffPlug, we ignore the index entirely. If a file is checked in the commit window, then it will be put into the commit. Simple as that. 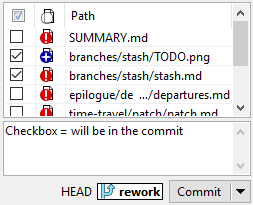 It's common to have a situation where you've done a bunch of work that you'd like to save, but you're not ready for it to be a real commit yet - you just want to keep it for later.

Vanilla git handles this with git stash. Because there are two places where changes can be - the working copy folder and the index - git has to do something pretty complicated. It makes one commit to save the index, and a second merge commit which saves the working copy and references the index commit.

It stores these as "refs/stash". If you call git stash a second time, it uses the reflog to keep the first stash around for a while.

Because it doesn't make a regular branch with regular commits, you can't use regular commands to get the changes back. Instead, you have to learn the various flags and subcommands of git stash.

Rather than introducing an entirely new mechanism for users to learn, DiffPlug handles this use case with the save for later functionality, which just uses regular branches and commits.

Vanilla git supports a "detached head" mode, which allows a user to not have a branch. Rather than support this exceptional case, DiffPlug converts it into a nominal case by automatically creating and checking out a new branch named detachedHead-deleteme. If that is already a branch, DiffPlug adds a suffix to make the name unique.

A user is never able to enter the "detached head" mode from within DiffPlug, but this ensures nominal operation in case they use DiffPlug with another tool (e.g. the command line) that results in a detached head state.

When a user clicks a commit, the tool shows them the changes which it introduced. When they right click that commit and see cherry-pick as an option, they ask themselves, "what does this do?" And the answer is: it applies the changes in this commit. The natural thing is to just call it apply.

One of the problems with a CLI is that it's hard for the user to express context. When a user right-clicks a commit or right-clicks a patch file, the GUI program knows what the context is. In a CLI, the user would either have to pass some kind of flag git apply --from-commit, or you could just make a whole new command to handle this case, as was done with git cherry-pick.

Most git guides will say something like "use git pull to download changes, and then git push origin master to upload them". Everybody already knows the words "upload" and "download", what's the point of confusing things with "pull" and "push"?

Also, git pull doesn't just download, it also merges your branch into whatever branch it is "tracking", unless perhaps you've set one of three global flags which causes pull to perform a rebase instead of merge.

If you can see the history branch at every step, then you don't need complex commands which automatically take local actions, which is why we only teach "upload" and "download".